Through a voluntary personal project constructed individually with the educators, the program aims to allow these teenagers to break with their usual living environment. In contact with the adult world and the requirements of navigation.

« Discovering the strength of nature, confronting oneself with going beyond oneself, being sensitive to respect for the environment »

The sailboat Mauritius has undergone a major remediation project in Portimão, Portugal, from 2016 to 2017. At the same time, it was placed under a Swiss flag (Gibraltar before). An official recognition as a place of placement by the “Service d’autorisation et de surveillance des lieux de placement (SASLP)” of the Canton of Geneva in order to accommodate young people (both boys and girls) placed by partners the Juvenile Court and the Juvenile Welfare Service of the canton.

In spring 2017, the boat entered service and completed the first sailing season from Portugal to Toulon (France) and back.  During these first three months of navigation, it hosted 18 young people in the framework of several socio-educational projects:

In line with the philosophy of the association, the ailboat also welcomed a number of first passengers who wanted to explore the open sea on a “working boat” dedicated to “doing together”. 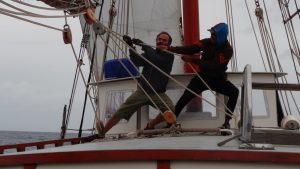 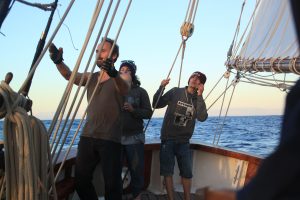 With the “Association Pacifique” project, socio-educational, reintegration, leisure and discovery projects for adolescents